After a flourish of teases, previews, tips, and even a leaked version about the big 11, Microsoft has officially confirmed the name for the next release of Windows: Windows 11.

The first most notable thing when you sign in to Windows 11 is the new Start menu and updated Start button. Windows 11 now aligns all this into the centre, this is definitely a push towards mobile devices and tablets.

The UI has been polished with a glass-like upgrade with curved corners, this is a really nice refinement on the previous Windows 10.

Our beloved Start menu no longer includes the Live Tiles feature originally introduced with Windows 8 and moves towards a launcher-style interface, similar to what you would see in Android. You will be able to access your apps, recent documents, and a new search interface from here.

Windows 11 includes support for light and dark mode. Windows chief Panos Panay says “the team has obsessed over every detail.”

An interesting addition is that Teams has been integrated directly into the bar as well. It's not clear yet if this will support other company chat applications like Slack or Google Chat. 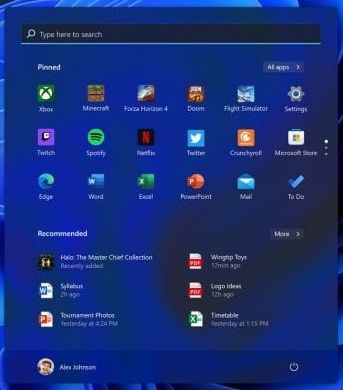 Another great feature introduced in Windows 11 is something called Snap Layouts and Snap Groups. Snap Layouts allow you to quickly "snap" apps into various modes and layouts that Windows 11 supports.

Snap Groups can be used to remember where your apps are stored, which is a very productive feature for those looking for better support across multiple monitors. These functions ensure that apps always open up on the correct screen, and in the correct format that you want.

At an obvious snap from the Epic vs. Apple drama, the Windows Store allows developers to use their own “commerce engines" - meaning devs can now use their own payment systems and Microsoft won't take a cut of it. “Windows has always stood for sovereignty for creators,” says Microsoft CEO Satya Nadella.

With an interesting spin, the Windows Store now supports Android apps and Windows 11 can run Android apps. Through a partnership with Amazon and Intel, Windows 11 will be using Intel Bridge technology to run these on your computer.

There is no clear indication if these apps will be restricted to the Amazon store items yet.

As expected, performance is a big focus for Windows 11. This comes down to the update sizes, which are 40% smaller and now run in the background. With this, you will see fewer interruptions from Windows 11 updates.

Note that Microsoft is raising its minimum specifications and older computers will miss out, however you can still use Windows 10 as it's supported until 2025.

At the time of writing, there is no release date for Windows 11 yet. We’re expecting Windows 11 to appear at some point in October, alongside other product updates. Windows 11 will be a free upgraded from Windows 10.

Will my computer support Windows 11?

Windows 11 drops support for any Intel Mac, here's why

What are TPM chips, and why is Windows 11 enforcing them?

Will my computer support Windows 11?

Here are all the default wallpapers coming to Windows 11